Book of the Day: Major Impossible 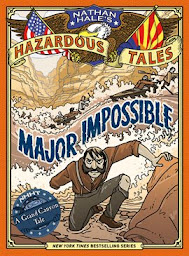 From Hoopla: "The ninth book in the bestselling series tells the story of John Wesley Powell, the one-armed geologist who explored the Grand Canyon John Wesley Powell (1834–1902) always had the spirit of adventure in him. As a young man, he traveled all over the United States exploring. When the Civil War began, Powell went to fight for the Union, and even after he lost most of his right arm, he continued to fight until the war was over. In 1869, he embarked with the Colorado River Exploring Expedition, ten men in four boats, to float through Grand Canyon. Over the course of three months, the explorers lost their boats and supplies, nearly drowned, and were in peril on multiple occasions. Ten explorers went in, only six came out. Powell would come to be known as one of the most epic explorers in history! Equal parts gruesome and hilarious, this latest installment in the bestselling series takes readers on an action-packed adventure through American history."

BMS Librarian Ms. Woznick is recommending a book a day! You can download the ebook of Major Impossible from Hoopla with a Beverly Public Library, reserve the hard copy of Lucky Caller for pickup at the library -- or check with Paper Asylum on Cabot St. to buy a graphic novel or comics.
Check the Graphic Novels page on the Summer Stories website for some more ideas about graphic novels to read!
at 11:31 AM